All of these videos are designed to be super helpful to you!  I release a new video every Monday at 12:34pm (PST). Stay up to date and enjoy! Just click "subscribe" below to get the weekly emails notifying of you of the new videos and giving you the link to them.  If there is anything you'd like to see a video about, just send me an email at: Kimberlynn@DecodingLearningDifferences.com.

Subscribe
Podcast Season 2, Episode 43: Spelling Lists- We Can Do Better!
Download the Audio!
Check out the previous Episode
Need some guidance? Check out available services! 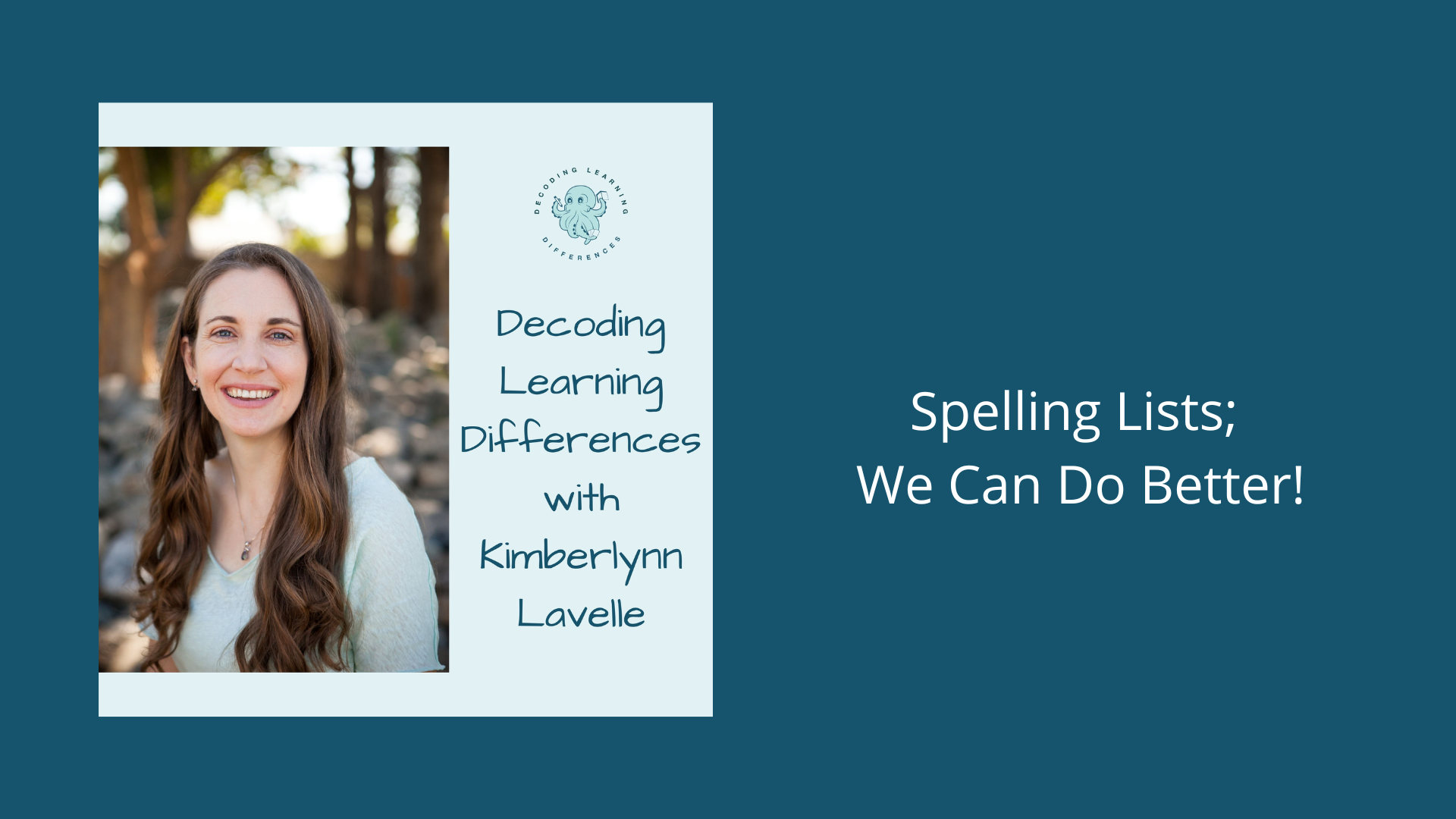 I can not count how many times I’ve heard parents worried about their child’s weekly spelling lists.

Parents want to know what they should do as far as accommodations, or if the list is reasonable, or if it’s just cruel to mark a kid wrong for letter reversals when they otherwise would have gotten 100% (finally).  Ouch!  Yeah, for the record, I do think that is cruel!

But I also just loathe spelling lists in the way that they are typically given!

The problems with traditional tests

Traditional tests are typically a list of words, often unrelated to each other.  Some lists are words all found in a common story that is being worked on that week.  Others might be a variety of ways to spell the long A sound (combining those all into one list is confusing and unhelpful!).

Additionally, we know from research that memorizing 10 - 20 words per week is NOT how anyone actually learns how to spell in their everyday writing.

We don’t memorize 20 words/week and then move on to using those words correctly in our everyday spelling.  We mostly just forget whatever we managed to memorize for the test, or we already knew how to spell the words.

To learn to spell, we need to learn the patterns of words.  More on that in a bit!

Kids who are successful on weekly spelling tests typically already know how to spell all or most of the words on the given list.  Other kids are further behind in spelling and might not know any words on the list.

Therefore some students are being expected to memorize significantly more words each week than other students.  And these are the very students who typically are struggling the most to learn spelling patterns.

I find it cruel to expect struggling children to memorize more words than their peers, especially because it is unlikely to benefit them in any way.

Finally, most spelling tests are graded on an “all or nothing” model for each word.  You either get the word completely correct or you get zero points.  In fact, the child may have spelled the word correctly but reversed a letter and the word is scored as wrong. I recently saw a parent post her child’s spelling list which would have been 100% correct if reversals were not counted against the child.  The child scored 10%.

The all or nothing approach also causes student growth to be missed, not showing the hard work they are putting in.  For example, some students are spelling using only an initial and final sound, without a medial vowel sound.  If that child remembers to use 3 phonograms on their spelling list, they are showing significant growth in their actual spelling ability, but might still “fail” the spelling test.

Yes, if your child’s school is still using an archaic practice of weekly spelling tests, please list accommodations for that test in your child’s 504 plan or IEP.

There are 31 spelling rules that account for the spellings of about 95% of English words, and the other 5% is mostly all words that are borrowed from other languages, and follow the rules of that language!

We can teach children to become proficient spellers in a systematic way that explicitly teaches each of those rules, and gives plenty of practice in applying those rules.

There are great programs that teach these rules explicitly (such as Spelling Mastery, Logic of English, or All About Spelling), or you can teach them using your own scope and sequence.  The key is to have a solid plan to teach these spelling patterns in a logical way and to follow it, ensuring that the student is learning along the way.

All of these episodes are designed to be super helpful to you!  I release a new episode every Monday at 12:34pm (PST). Stay up to date and enjoy! Just click "subscribe" below to get the weekly emails notifying of you of the new episodes and giving you the link to them.  If there is anything you'd like to see an episode about, email me your suggestions at Kimberlynn@DecodingLearningDifferences.com.
Decoding Learning Differences